Just One is Enough 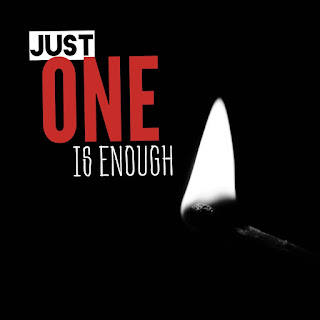 It's wine o'clock on a Saturday night, and I am kicking back with a red and contemplating (with a not insignificant level of exhaustion) one of the most thought-provoking and emotional conferences I have ever attended.  It was called "Reading Matters", and it was a YA conference organised and run by the Centre for Youth Literature at the State Library of Victoria, Australia.

It was politically charged and emotional.  I mean, I guess I kind of expected it to be.  A lot of librarians, teachers and writers are very socially conscious and are actively concerned about the multitude of injustices, inequalities and hurts that thread through modern society. More importantly, they want to talk to teens about this stuff.  They want to present realistic, meaty, honest narratives that tackle bullying and racism and poverty and mental illness.  They want teens to know that it's OK to feel strongly, to question, to look outwards and not feel alone, to walk in someone else's shoes for a while. To not be ashamed to be sensitive and honest and thoughtful.  To take time to find out who you are and have the courage to recognise that maybe you haven't quite figured it out yet, but that's OK.  To laugh and to cry and to be vulnerable and strong.  To unpack all the shit that happens for the first time when you're in your teens and to know that we won't dismiss you or roll our eyes and tell you that "it's just a phase". We remember what it's like.  It's shit and it's hard and it's overwhelming but you're not alone.  Most importantly that you're not alone.  To tell you that literature - reading stories, writing stories, talking about stories, sharing stories - is one of the best ways to process all the crap that teenage can throw at you.  To prise open the cracks of the world and see beyond, and realise that this kind of stuff is happening to other people as well.

Jesus we covered a lot of ground.  Racism, cultural appropriation, diversity, gender identity and sexuality, bullying, mental illness and suicide.  Some would say that perhaps these topics are too heavy for a teen audience.  That perhaps we should shield our children from these terrible life truths so their minds and hearts are not corrupted (I used to work in a school that subscribed to this belief). But as one of the authors pointed out (Will Kostakis, who recently emerged from the closet as gay to all sorts of pointless hostilities) the students who are faced with this whitewash, this denial and reluctance to talk openly about these topics - it's these kids that are forced to turn inwards. The "square parents" who shut down any acknowledgment or discussion of differences or problems or struggles, the parents that believe that ignoring or denouncing an issue will make the problem go away. This attitude creates a perfect environment for the individual to fester alone in silence and desperate denial.  Without support, or company, or even the benefit of a sympathetic ear to listen to their concerns, they truly (but erroneously) feel they are completely alone in the world. Oh and that crippling sense of isolation? Well, we all know how it can have rather dire consequences. Check out these shitty and completely alarming youth suicide statistics from late last year:


-  Suicide rates for 15 to 24-year-olds at highest rate in 10 years
-  A third of all deaths of young men are due to suicide
-  41,000 young people aged 12-17 have made a suicide attempt
-  Twice as many 15 to 19-year-old women died by suicide than in 2005
-  Suicide rates have increased for children under the age of 14
-  One-quarter of women aged 16-17 years old have self-harmed
-  Aboriginal and Torres Strait Islander, LGBTIQ, seriously mentally ill youth are at high risk

I have said it before, and I will say it again.  Librarianship has a massive social element to it.  We are people who have the power to reach out and touch lives.  And I am not just saying that as some kind of bullshit feel-good statement. An attentive and sympathetic ear. The right book at the right time. Just being there to help.  Saying "you're welcome here, whoever you are, you are not alone here".  If we even reach one, just ONE teen (or adult, or elderly person, or whoever) and change a mind, make a difference. Bring someone back from a terrible, irreversible decision.  Just one in a whole career. Just one is enough.