The Trials of Youthful Exuberance 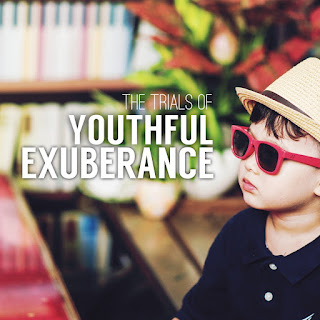 Attracting youth to the library is such a THING.

Our library's youth space was about as inspiring as cold, one day old oatmeal, so we recently underwent a total revamp.  We now have funky chairs and bookend art, traditional games, gaming consoles and colouring stations - all these things have merged to create a much better vibe in that area, but has it attracted youth? Well yeah, but it's sort of attracting everyone at the moment because it's such a nice area to hang. This is a minor issue and one that could probably be fixed up with a bit more obvious signage or something, but that's not the biggest problem that has emerged. We are certainly attracting more youth to the library, the only problem is they're not the kind of youth we expected...

We are now hosting young people whose only requirement from us is to leave them be whilst they use the space as a lounge room, i.e. their own personal lounge room, to the exclusion of all others. The way they do this is by being loud, obnoxious, lying all over the furniture, taking their shirt off (on one occasion), bathing in the toilets (ahh, yeah) and then leaving all their wet stuff in the lockers, and other memorable behaviors.  Basically, they have no interest in interacting with us other than swearing at us occasionally or getting angry when we tell them to put their shirt back on (seriously!?), or to be quiet or turn off their (often R-rated) music or any other number of random and unlikely requests we find ourselves having to make. So great! We have youths in the library.  And now they are scaring away our regular patrons, or the young people who want to use the space productively, and they are even intimidating some staff.  Has our experiment in youth engagement actually worked?

Well, yes and no.  We have attracted youth - but of the wrong kind.  Notice how I worded that particular comment; "Youth of the wrong kind".  This is the description that has been thrown around the staff room during the many heartfelt discussions we have had regarding this problem.  But I have to ask, how fair is this description?  And what youth then are the "right kind"?  And hold on but aren't we, as a library, supposed to be there for ALL youth?

It's got me to pondering why these guys stumbled into the library in the first place.  We are actually in a spot that's kind of a wee way from anything particularly exciting, like the shopping centre or schools - so why go out of their way to visit?  I think one of the main reasons is that they have nowhere else to go - home probably sucks, it might be cold and uncomfortable and depressing, they might have issues with their parents or other family members, and their mate's places might be just as unwelcoming.  The library is probably the only warm and comfortable place they have left.  So are we really going to kick them out onto the streets?  Aren't we supposed to be for everyone?  And in this era where libraries almost act as a quasi-social service, how far should we extend ourselves to embrace this dimension of our new community role? And as Librarians, are we really even equipped to deal with this kind of problem?

A quick Google search highlights the fact that we are definitely not alone - it also offers many different suggestions for solutions; from the "kick em out, you don't owe them anything" to "you must be patient, learn their names and keep trying".  I guess whatever we decide it will likely be a bit of both, but we are all getting together to brainstorm the problem and see what we can come up with - so we aren't throwing in the towel just yet.

So, this is the beginning of our youth engagement journey - I would SO LOVE to hear from anyone who is in the middle, or nearing the end of theirs!