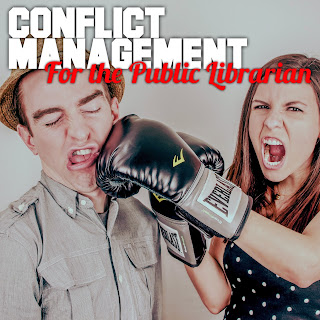 THE GENTLE ART OF CONFLICT AVOIDANCE

As part of my public library persona, I have to (unsurprisingly) deal with the public.   Being in one of the busiest and most diverse communities in Victoria I also deal with some interesting customers.  Thankfully, my employer is fairly insightful on this front and so recently arranged for us newbies to attend a full day of "Conflict Resolution Training".

Our trainer was no slouch.  He seemed fairly laid back, but then casually mentioned that he is one of only four high-level hostage negotiators within Australia, and has trained in negotiation with the SAS and the FBI.  Not that I imagine a heated overdue fine discussion will ever end in a hostage situation, but I guess it depends on the size of the fine.  As with any typical training session, there was a lot of whiteboard writing and workbook reading and question answering - but what was most interesting was watching video snippets of previous students navigating their way through role play scenarios.  These weren't your usual role plays, either.  Professional actors were hired to be very professionally angry at us, swear at us, and generally be annoyed; very convincingly disgruntled.  And even though you knew they were actors, I was still nervous.

So what newly-learned skills did I take into my three conflict scenarios?  And was I able to apply them under pressure?  In training, the two major messages to take into conflict were empathy/listening followed by ownership/resolution.  I had always thought I was generally good at both of these steps, however when faced with a convincingly disgruntled and swearing customer, my empathy ability flew out the window and all I wanted to do was resolve the situation.  Bam - that's exactly what the trainer said would happen.  And so the self-awareness kicked in and I was able to consciously take a step back and work at the empathy first.  Work at listening, agreeing and sympathising and showing understanding, and also eliciting a few "absolutely" and "definitely" from the patron.  Only then, when I had demonstrated that I understood where the patron was coming from, could we begin to discuss resolutions.

Did I think that I learned much from this training, and do I think it's relevant to life in a public library?  Hell yeah and definitely.  I hate conflict, I avoid it as much as possible, and can sometimes suffer from being a little too soft - but this training helped me in some small way to realise that conflict is just another interaction that needs to be navigated through, and if you have the right tools then it can somehow seem less daunting.  It's only been a few days since the training - i'll post an update if and when I can report back whether my new knowledge was successfully applied!