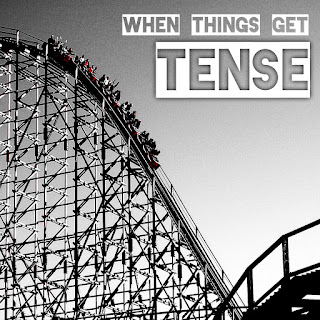 WHEN THINGS GET TENSE

Not sure how to start discussing this one.  It was a weird night in the library.  And as the title of this post suggests, things got a little tense.  I guess I can expect to see this sometimes, or maybe more than sometimes.  When you're in an public space that's warm and inviting and entertaining and comfortable, people are going to want to hang out.  Unlike your lounge room though, you don't really have a say as to who that is.  Sometimes the odd person wanders in who is a little different, or perhaps has taken something they shouldn't have, and things get tense.  We are dealing with humanity here.  We're a diverse bunch.

We had a young guy come in tonight who is known to staff.  He has his issues, whether they be mistreatment or a bit of neuro-diversity or maybe a bit of both, who knows.  He likes to pace and sometimes can be a little loud, but for the most part he keeps to himself.  Mostly.  I guess sometimes people get frustrated and angry, and when you don't have the coping mechanisms (whether that be through genetics or circumstance) things get tense.

His pacing and loudness were escalating and he was becoming a tad unpredictable.  His mates, who could usually placate him, weren't having much luck.  I can't say that it bothered me all that much, but I could see it bothering my co-workers, and it was bothering some of the other patrons.  I am sure it bothered our security guard, who patiently and bravely took a few kicks and punches as he tried to escort the fellow out of the library.  The police were called.  Was he a threat?  Who knows.  He probably could have been, but definitely best to be on the safe side as if someone had been hurt, the inevitable question would be "Why didn't you do something sooner?"

I don't feel at all bothered by the incident, but then I think - will this be a gradual build up?  Will I, over the course of months and years, be gradually worn down by seeing this over and over again, and eventually come to a natural, baseline state of edginess when I am on the floor?  I hope not.  I hope that I will always be able to cope and feel safe at work.  I am part of a great team of co-workers and our security team are awesome.  Their presence and support dissipates any "tense" that may be present.  I also think of the happy times, when a patron is so grateful for my help, or I help a young kiddy wink find just the right book.  It's a fabulous feeling to know you've helped someone or put a smile on their face.

Due to the nature of the job, I can see that each day, each week, each month, will have it's ups and downs.  There is no predicting what will happen on any given shift.  I just have to stay mindful of remembering the good and not just the bad.  Which is probably a good philosophy for life in general, really!