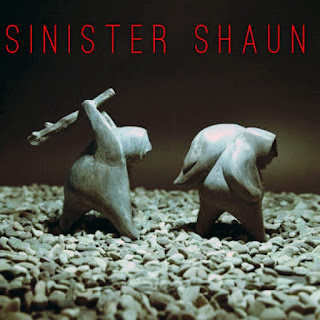 
This book is extraordinary.

I have written on Shaun Tan before, but in case you missed it, he has an uncanny ability to inject a subtle sense of unease and disquiet into his works - both written and visual.  There is something that is simplistic and mesmerising about his art.  I find myself staring at the tiniest detail with a furrowed brow, all the while wondering how the simple curve of a line, or detail of shadow, can make me feel like I should look over my shoulder; like there is something waiting for me just beyond that dark corner.

When I discovered that Shaun Tan had published a book of Grimm's Fairytales, and had created artworks to depict each narrative - I dived on it like a seagull on a chip.  And I haven't been disappointed.  The book does not seek to retell each tale in its entirety - each double page spread presents a small but flavoursome morsel of the tale, which is then enriched by Tan's sculptural interpretation of the narrative on the opposite page.  The sculptures are made of primitive materials, clay and stone and other selections I can't identify; and they are arranged on carefully chosen backdrops, placed amongst subtle set dressings, and (the photographer in me is speaking here) presented with fantastic use of light and shadow.

But it's hard to know which is more unsettling - the sculptures or the narratives.  Each excerpt is generally a few lines long, but honestly - that's enough.  Take the following as one example:

The Boy Who Left Home To Find Out About Fear

The boy went to the gallows, sat down beneath it, and waited until evening came.  Since he was cold, he made a fire.  When the wind knocked the hanged men against each other and they swung back and forth, he thought, 'They must be freezing up there, I'd better bring them all down to sit by the fire'.  And so he did, one by one, all seven of them.  They sat there beside him without saying a word, without moving, and soon enough their trousers caught on fire.  'Be careful,' he said, 'otherwise I'll hang you all back up there'.
- except from "The Singing Bones" (Shaun Tan, 2015)

Opposite this cheery tale is a moodily lit scene of 7 clay figures hanging from a gallows, and a solitary boy sitting beneath them reading a book.

I am not sure what I expected to get from reading this.  I knew it would make me feel something, Shaun Tan's work always does.  It made me feel like I should read more Grimm's Fairytales, that there is so much more to learn.  But what it also gave me was inspiration.  As a part-time songwriter, there is a modern re-telling of all these unsettling little vignettes, I have so much material to work with I don't know where to start.  I just know I will be delving back into this book for many years to come.