It actually IS brilliant! 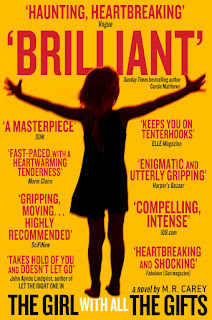 THE GIRL WITH ALL THE GIFTS (M.R. CAREY)


This book was totally worth every last cent of the $12.00 I paid for it.  Wandering the isles of Big W in an attempt to kill some time, I (naturally) gravitated towards the book section and was overcome by the psychology of the retail displays.  10 minutes later I had parted with my money.  Kudos to the marketing psychologists for a job well done!

I was sucked in by the bright yellow cover, and the fact that it was crowded with glowing reviews, one of which was by Joss Whedon and I thoroughly respect anything that man has to say.  I didn't even really know what the book was about, as the jacket was so crammed with praise the actual blurb was very brief.  Perhaps that helped in the end - I'm not sure I would have picked it up if I knew the story was about zombies.

That's not to say that I don't enjoy a good fantasy / sci-fi.  And I do really enjoy the current popularity of zombie apocalypse tales; they are a great vehicle for contemplating important questions and facilitating deep soul searching on the nature of human relationships when polite and ordered society disintegrates.  The Girl with all the Gifts is no different.  But it does have a few unique plot devices which makes the story all the more interesting.

I won't go into the plot all that much, other than to say there is a young girl.  She is a "hungry" (as they are called in this zombie iteration), but she is different.  This is a story of her self-discovery, and the effect she has on those around her on the way.

Don't make the error of dismissing this book as just another zombie tale.  This was one of those rare books I seriously had to FORCE myself away from, just to achieve simple tasks like eating.  It's definitely an un-put-downable.  I would put it in a school library, but keep if for the more senior kids, I think they would devour it.

(Oh and unsurprisingly, I just discovered it has been made into a very soon to be released movie...)