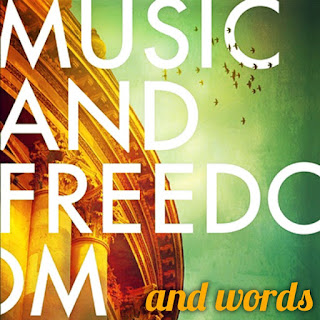 The other day my favourite bookshop (Readings) opened a new branch in a mega mall in Doncaster.  I'm not usually one for mega malls, but I felt the need to go and support Readings and basically give myself an excuse to browse and buy books (accompanied by another Librarian friend, of course).

One of the books I bought was Music and Freedom by Zoe Morrison.  It so happens that this title just won the Readings Prize for New Australian Fiction for 2016.  Totally justified win, it has to be said.

I am a Librarian.  I am a mediocre musician.  I love all things creative that centre around words and sounds, so this book spoke to me in spades.  But spades of what?  Spades of discomfort and rage.  Spades of melancholy and infuriation (is that even a word).  Spades of happiness and hope.  Spades of curiosity.  A wide spectrum of spades.

I would suggest that you start reading this book with the author's biography.  Zoe Morrison is no slouch.  She is evidently one of those sorts who annoyingly combine talent and intelligence and drive and all sorts of other positive attributes in one convenient package.  But to me, her biography acts as the bedrock on which the story sits.  You can see how her experience and knowledge of the major themes allows the narrative to take on a level of realism and desperation, making it wholly more engaging (and enraging, and mesmerising, and compelling).

The one thing I loved the most about reading this book, though?  Spotify.  As a classical music dunce, what the hell is the rising baseline of Rachmaninoff's Piano Concerto 2 in C Minor?  Thank you, Spotify.  Now I can listen to the music as it is being described on the page, which adds a unique and beautiful facet to the narrative and lifts the story beyond mere words on a page.

Should you read it?  Yes.