It's been a while. 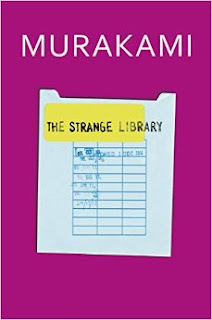 And I gotta say, as a Librarian I seem to find little time to read books these days, which is sad and pathetic, but seems to be the lot of many of my Librarian friends!  It's a cycle of irony which we can't seem to escape.  What's worse is that I am constantly bombarded with books I want to read, and this just makes the whole situation even more depressing.  But enough excuses, I should make the time, and I am trying!

One little book that popped up on my radar recently was Murakami's "The Strange Library".  Mainly because a) it is written by Murakami, who is one of my favourite authors, b) it had the word "Library" in the title, and c) the hard-cover was on special from Readings for $16.99.  SOLD!

Little did I realise that this lovely wee tale is in fact a short story, bound in a beautifully illustrated (and lovely smelling - very important) pink hard-cover edition with a library card slip on the front.  Yep, It was the full package.

Now, it's not really a YA book per se, but the main character is a young boy who, upon determining that he would really like to know how taxes were collected in the Ottoman Empire, decides to pop into the Library on the way home.  He is given some excellent tomes on the topic, and told to go downstairs to the basement reading room, which is staffed by a rather demanding and strange looking old man,  It's only when he is told that he can't go home that things take a sinister turn, and some rather weird and fantastical characters make an appearance.

As with most of Murakami's work, there is a strong element of magical realism and it's all a little avant garde, but the metaphor for this wee tale, I think, is probably quite relevant to the adolescent.  That assumes that I have interpreted it correctly, of course.  I kind of think I might recommend it to some of the keen older readers at school, and see how they choose to interpret the tale.  If anything, it's one that makes you think, and think, and say "Well, what the hell was that all about?!".

I love Murakami's stuff, and this little tale is no exception. :-)